One of four boys, Mays was raised in Buckhurst Hill, Essex. He attended the Italia Conti stage school before going on to win a place at The Royal Academy of Dramatic Art.

After graduating from RADA in 2000, Mays soon started appearing in a number of supporting roles ranging from a bit part in the BBC soap opera EastEnders in 2000 to playing a pilot in Jerry Bruckheimer’s big-budget Pearl Harbor (2001). He was cast in the Mike Leigh film All or Nothing (2002) as Jason, a thug who abused his girlfriend, and also appeared in Leigh’s next project, Vera Drake (2004), in which he played Sid, the protagonist’s son. His performances for Leigh resulted in further offers of work.
One of Mays’s most notable early roles was in the improvised BBC drama Rehab. Directed by acclaimed film maker Antonia Bird, Rehab was a drama about life inside a drug rehabilitation facility. He starred as Adam, a young heroin addict released from prison and sent directly to rehab. For his performance Mays was awarded the Best Actor award at the Palmare-Reims Television Festival in 2003.
Mays has continued to work regularly, and has appeared in a variety of productions, which have included a part in Johnny Vaughan’s sitcom, Top Buzzer (2004), the lead role of Carter Krantz in BBC Three’s Funland (2005), as well as film appearances in Atonement (2007), White Girl (2008) and The Bank Job (2008).
Mays starred in Channel 4’s Friday-night comedy-of-errors sitcom Plus One, in which he played Rob Black, the perennial victim of Sod’s law whose girlfriend has dumped him to marry “Duncan from Blue”. He played the role of Michael Myshkin in Channel 4’s adaptation of David Peace’s Red Riding trilogy. He also appears in the third and final series of Ashes to Ashes on BBC1 as Discipline and Complaints Officer, DCI Jim Keats.

In addition to his TV and film work, Mays has also starred in seven stage plays at London’s Royal Court Theatre. The productions have included Ladybird, Motortown, The Winterling and Scarborough, and in late 2012 Hero. Simon Stephens wrote the lead role of Danny in Motortown with Mays in mind. He went on to win critical acclaim for his performance, but the hard-hitting play was too much for some audience members and walkouts were not uncommon.
In 2011, he starred in the Harold Pinter play, Moonlight, at the Donmar Warehouse.

Projects in 2009 included Hippie Hippie Shake (as ’60s alternative figurehead David Widgery, alongside Cillian Murphy and Sienna Miller); a role opposite Anna Friel in the third series of Jimmy McGovern’s The Street; a “mark” in the BBC drama serial Hustle; as well as an appearance in the independent British movie Shifty, co-starring Riz Ahmed, for which he received a nomination for best supporting actor at the British Independent Film Awards.

Mays appeared in the new BBC sci-fi series Outcasts, which broadcast on 7 February 2011, as PAS Officer Cass Cromwell, and in the ninth episode of the 6th series of Doctor Who, entitled “Night Terrors,” broadcast on BBC One on 3 September 2011. More recently, he had a supporting role in the Steven Spielberg film The Adventures of Tintin, playing the henchman, Allan, and in Sky’s new year adaptation of Treasure Island, where he played Dr Livesey.
Danny had a lead role in the new BBC drama Public Enemies, a 3-part series that tells the story of murderer Eddie Mottram and his probation officer, Paula (played by Anna Friel), which aired in January 2012. Film-work included Welcome To The Punch, and Byzantium.

In 2013, Danny focused on theatre work.  Two return performances at the Donmar Warehouse beginning in February with Trelawny of the Wells working again with director Joe Wright (Atonement). Danny portrayed Ferdinand Gadd. August saw Danny lead in Nick Payne’s The Same Deep Water as Me. Danny then went on to lead the cast in the revival Jez Butterworth’s Mojo at The Harold Pinter Theatre in November. He was nominated for Best Supporting Actor in the What’s On Stage Awards for his performances in Trelawny of the Wells and Mojo.

In 2014, Danny’s television works included The Nightshift for Sky Arts for critically acclaimed Playhouse Present series premiered in May. Danny worked again with Ashley Walters (Top Buzzer, Outcasts). The multiple award winning Common a hard hitting drama exploring the effects of the Joint Enterprise Law, aired in July.   The Great War: The People’s Story aired on ITV in August 2014 to coincide with centenary of the First World War. The Great Fire premiered on ITV in October and Danny portrayed diarist Samuel Pepys.

2015 saw Danny returning to the stage in his much anticipated June National Theatre debut The Red Lion written by Patrick Marber. Working again with director Ian Rickson (Mojo) and Peter Wight (Trelawny of the Wells, Public Enemies, Vera Drake). The film Victor Frankenstein will be released in November 2015.

2016 Started off with Dad’s Army film release on 5 February and followed by BBC’s Line of Duty. Danny was then back on the boards for his debut at The Old Vic in Harold Pinter’s The Caretaker. Danny will share the stage with Timothy Spall and George MacKay.

In July 2016 The Infiltrator was realeased. In September The Limehouse Golem premiered at TIFF. It was announced in November 2016 that Danile Mays had a role in Rogue One: A Star Wars Story as Tivik.

2017 saw Daniel Mays return to television with two series airing in April: Born to Kill on Channel 4 and Guerrilla on Sky Atlantic in the UK and Showtime in the US.

In May, Danny began filming “Swimming with Men” (2018) for HanWay films. This project saw him working again with director Oliver Parker (Dads Army).

Against the Law premiered at the BFI Flare Film Festival on 16 March 2017. Danny portrays homosexual journalist Peter Wildeblood. It will air in July 2017 on BBC Two during the BBC’s summer-long Gay Brittania season.

Daniel Mays was nominated on 11 April 2017 for a BAFTA for Supporting Actor for his stunning role as Danny Waldron in Line of Duty.

The LimeHouse Golem was released in September. Also that month, it was announced that Danny joined the cast of “Good Omens”. He also filmed for HBO’s My Dinner with Herve and the theatrical release The Rhythm Section with Blake Lively.

In 2018, Against the Law was nominated for a BAFTA for Best Singled Drama.

In June of 2018 Danny joined the second series of Dave Channel’s Porters.

As of August 2018, Danny is about to begin filming on Sky’s Temple with Mark Strong. 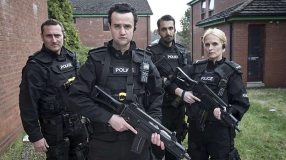